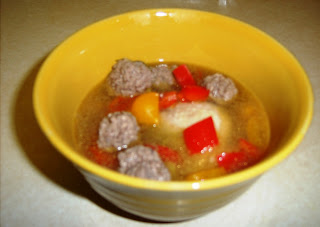 Great but slightly weird breakfast (the picture is on the left). I boiled 4 chicken thighs (bought at the Natural Grocers mark down bin/freezer for $1.58) then later added red and orange pepper and a few green onions. Later still (20 minutes or so) I put in tiny meatballs left from the ground burger I’d thawed and used the night before. It was only about a half bound of beef and a very good use of that amount. Of course, prior to doing GAPS that half bound of burger would have been used in something like Navajo Tacos and enough for all of us! Instead it was just enough for Joe and I plus a couple of meatballs for Sierra to take with her lunch. I have to say it was a very nice soup. Joe had a piece of chicken plus the rest of the soup and lots of meatballs. I didn’t eat any of the chicken for breakfast but did have plenty of broth, veggies and several meatballs. Joe only made a half pot of coffee this morning and very weak. I poured myself a half cup but drank less than half of it. Joe must not have had much coffee either since there was over a cup left in the pot when he went to work. That is a change from our usual full pot (12 cup) in the morning.Today was the first day for Joe to work since we started GAPS. Usually he takes snacky style foods with him (crispy almonds, jerky, hard boiled eggs, etc) and supplements from the lunch cart (he works at a school) but that won’t work doing GAPS. Today he took a silver bullet style thermos full of beef broth, a thermos with one of the chicken thighs and the soup (after breakfast I added some already cooked beef stew meat that I had in the freezer to the soup pot since most of the meatballs were gone), and another thermos with sliced roast beef topped with additional broth. Sierra also took a thermos with a chicken thigh, a few meatballs and the soup for her lunch.

I got that instant hunger feeling around 10:30. The rest of the Butternut Squash Soup made on Friday curbed it perfectly. My energy for the entire morning was incredible. I was able to do several things including working on my bookkeeping job, picking up the house, laundry, dishes (I can’t seem to stay caught up on the dishes with the GAPS going on, glad my teens take turns doing them too) and food prep without issue. Christopher and I even did a little Tot School.

Around 12:30 Christopher and I finished off the breakfast soup, at least the solids in it. I still had some broth left that I put in the fridge for ‘snacking’ on. I very much enjoyed the chicken thigh that hadn’t appealed to me at breakfast time and Christopher loved the stew meat that I had added in. I kept the soup on the simmer burner all morning which gave it a wonderful rich flavor.

Hunger hit me again around 3 so I had a little roast beef and some green beans.

Dinner was wonderful. I made Cod Fish and Mushrooms, mashed carrots and we finished off the green beans. Joe and I loved the fish.

My mood was super good all day. I felt wonderful with more energy that I’ve had in weeks and weeks. I did wish for a die off bath today but couldn’t take time to manage it. However it did have a foot bath which was recommended as an alternative on GAPS Guide website . I think it was helpful.

Joe said the amount of food he took for the day was good and he was feeling well. Today we will start Stage 2 by adding in egg yolks. I found this very nice website which details how a couple went through their GAPS stages and their food ideas.
Our breakfast soup is cooking. Today it is antelope, leeks and tomatoes seasoned only with sea salt. Stage 2 allows fresh herbs which I’m looking forward too. We’ll add egg yolk to the soup right before serving (one egg yolk in each bowl). I’ve always been a little iffy about eggs. Not really something I choose to eat. I use them plenty in baking and the family eats them fried or whatever but for me I tend to rarely have them and prefer them hard boiled. A fried egg doesn’t usually appeal to me. That all being said, I’m extremely excited about adding an egg yolk to my soup bowl. I’ve read it makes the soup quite creamy and add extra richness. Plus it feels like forward progress to be moving on to the next stage. I woke up feeling quite good again today so I’m feeling very ready for Stage 2. Joe woke up feeling tired. He says he didn’t sleep well last night but doesn’t think it is die off related.

Have I mentioned that it is incredibly warm here still? It has been in the mid 80’s for several days. In fact other than one or two days in the low 60’s the weather has remained summer like. I do enjoy the warm weather but think that cooler weather would make all of the soups and broths we are eating more enjoyable 🙂 Rain in the forecast for this weekend so that will for sure be soup weather.