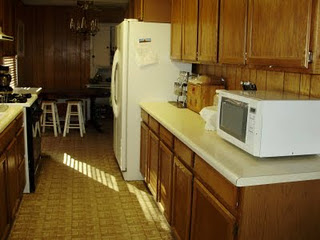 I hate to admit that I actually drug my feet a bit moving the micro out. I was excited to do it but then I got hung up on ‘how in the world I would heat up my heating pad thingy’. Granted I only use the thing once every six months (maybe more, maybe less- I really don’t keep track of it) but the night before the micro was to leave, I used it.

Seriously though. Do I really want to keep that big clunker on my counter just in case I’m going to use it? And since I don’t want any food or beverage heated in the microwave and having the thing there is a temptation especially for my husband (coffee warm up) and Kiki and Lulu (who really don’t understand why we have to be so ‘old fashioned’ and not use a microwave) and to be quite honest, myself. Because let’s face it, the microwave does have a major convenience factor.

I bit the bullet and now it is gone. Not completely gone though, I just moved it to a storage area until it can leave the house. My counter space is HUGE. Of course, it only took about 5 minutes for other stuff to be put there. I’m sure you know how that goes.

Thinking about ditching the microwave but not sure how to heat up foods? Here is a great article to help you with that.

Yeah or Nay on the microwave at your house? Why?
Photo: My kitchen circa November 2009- it still looks the same minus the microwave
Millie Copper

Millie Copper is a Wyoming wife and mama. After reading Nourishing Traditions in early 2009, her family began transforming their diet to whole, unprocessed, nutrient dense foods—a little at a time while stretching their food dollars. Millie is passionate to share how, with a little creativity, anyone can transition to a real foods diet without overwhelming their food budget. Millie began blogging in late 2009 and has amassed a collection of frugal recipes and methods. Her specialties include cooking with wild game and creating “Stretchy Beans”. Discovering a love of writing, she has penned four books focusing on healthy eating on a budget and is trying her hand at fiction writing. Learn more at MillieCopper.com.
6
Previous Post
Next Post

2 weeks of real food based on the thrifty food plan budget guidelines developed by the USDA. These are recipes and tips for actual nutritious and thrifty meals.

When you request this free eBook, you’ll automatically be added to our email newsletter.
You can unsubscribe at any time. No hard feelings. 🙂