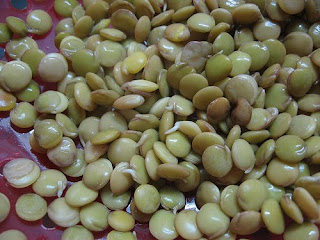 I thought I had a post on here about how much I love lentils. And while I do mention lentils quite often I don’t seem to have a post completely dedicated to these little gems.

I did not grow up eating lentils and to be quite honest the first time I made them I wasn’t overly impressed. They fell apart when I cooked them and ending up resembling something like oatmeal instead of a bean. The taste was nothing to write home about either. It wasn’t bad just kind of blah. But I stuck with it and found some recipes that really worked for our family. Now I really enjoy both eating and cooking lentils. And I really enjoy sprouted lentils.

I like to make big batches of foods one time and turn them into other meals over the next few days and originally that was how I cooked lentils also. A blog that is no longer available (Lentils and Rice) was where I first read about cooking up a batch of lentils and brown rice (together). Day 1 would be Lentils and Rice with green salad. Day two the lentils and rice would become patties and then day three a soup or maybe a fritatta.

I don’t always cook my lentils and rice together. Instead, I soak the lentils on day 1 and use them that night in something like this wonderful Majadareh. Wardeh states that this is an authentic recipe, but I’m sure that by the time I make my changes, it is no longer authentic 🙂 We certainly do enjoy it though.

My changes are fairly minimal. Since I want to have lentils for not just the one night but for several and as different meals I soak about 5 cups of lentils overnight. The following morning, I rinse them (in a colander) and allow to them to being the sprouting process during the daytime. I also put brown rice to soak (in it’s cooking container) for the day.  Or if I already have leftover cooked brown rice, I’ll just use that adding it at the end of cooking.

By late afternoon, the well soaked, and beginning to sprout, lentils have plumped up and increased in size. I remove about 6 cups of lentils to use for my Majadareh. I then proceed with the recipe as listed substituting broth for half of the water. Since I get rid of the soaking water from my lentils I do have to keep an eye on the liquid as everything cooks. Sometimes I need to add more water/broth. Sometimes it works out fine.

In the comments section, Wardeh indicates that the authentic way to serve Majadareh is with a green salad (tossed in olive oil, lemon juice, salt and pepper) and plain yogurt serving all three on the same plate. And possibly alongside a roast, meatballs, or salmon. We usually just have the Majadareh, salad and yogurt but sometimes I’ll make these delicious Arabic meatballs also from Wardeh. This makes a very generous amount of Majadareh which means we usually have this for lunch the next day too.

When we are having lentils, Day 1 is almost always Majadareh now. I really love this dish!

I have left my drained lentils to sprout. What works best for me is to sprout them in the colander that I’ve drained them in. I put a plate under them and a light towel over them and sit them on my counter. 24 hours later they will usually have a small tail on them. At this point I can use them as a lightly sprouted lentil such as Sprouted Lentil Tacos which are spectacular or I just pretend they are soaked lentils and use them as such. During the winter we especially like Garam Masala Lentil Soup with Coconut Milk. I use about 2 cups of the slightly sprouted lentils in this soup along with 1 cup of soaked rice. And I substitute broth or broth/water for the 8 cups of water.

Edited to Add: I decided to change my menu around for the week and made the Garam Masala Lentil Soup a day early. As a result, I hadn’t put any brown rice to soak to add to the soup. Instead I used 3 1/2 cups of the lightly sprouted lentils. It was delicious. And very nourishing since I used only chicken broth and coconut milk as the liquids. Plus with using just the sprouted lentils I believe the recipe is GAPS friendly.

By this point I usually have well sprouted lentils. And one totally fun thing about lentils is they expand tremendously when sprouted. Truth be told, I often have enough sprouted lentils left for not just one but two meals from my original 5 cups (about 2 pounds). I’ve recently discovered the best Sprouted Lentil Burgers from Cara at Health, Home & Happiness. I actually discovered these when I was subscribing to her menu mailer. In the menu mailer she serves them with a Tahini Dressing. WOW are they good.

Other great Sprouted Lentil meals are the tacos previously mentioned, Lentil Slaw, Spicy Sprouted Lentils or a Lentil Salad. I love doing a lentil salad (something like this) or lentil slaw since it can easily be adapted to whatever ingredients we have on hand. With the amount of lentils I have left, I can make a big batch allowing us to enjoy it for a couple of days since this salad seems to improve with age (especially with a vinaigrette style dressing). Of course, there is a chance by that point that we could get a little tired of lentils. That doesn’t usually happen since I’ve created different dishes with different flavors but by making that salad/slaw I can turn it into a side dish instead of the main focus. A slab of meat sitting next to a sprouted lentil salad looks quite nice.

Lentils are incredibly frugal. I usually buy them in bulk for around 75 cents a pound. $1.50 for the basis of 3 or 4 meals seems pretty reasonable to me. In addition, the recipes listed/linked above all have very basic ingredients that don’t add terribly to the cost.

Do you enjoy lentils? Please share your favorite lentil recipes.

Stretchy Rice: What Is It + Delicious Rice Recipes