Real Food and Me 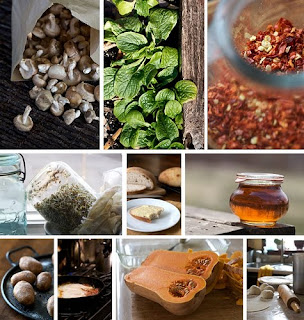 I was driving in to work this morning (at 5:30AM) and thinking about a blog post that I wanted to share. Kind of an update on why we continue to stick with real/whole/traditional foods. Funny thing, when I came home and had time to check my reader for today’s blog postings Jill at The Prairie Homestead had a very similar idea for a post. Side note: Take a minute or two and check out Jill’s blog. She offers some great information and be sure to take a peak at the pictures of her goats. They are adorable and two of those goats are going to come live with me next month. Yep, I’m going to be a goat mama! Anyway…

When we started real food it was more in response to what we were learning about food and how the information that had been shared with us over the years through the media, the government and the grocery stores was not what we felt food should be. What had happened to eating foods as close to their natural state as possible? Why were we being told that it was better for our health to eat ‘engineered’ foods instead? And who was paying for all of the studies that said what was good for us and what wasn’t?

As a nation, our health is dismal. We have cancer, heart disease and assorted other ailments running rampant. Autism, ADD and ADHD have increased substantially in recent years. We have a variety of ailments that people are ‘diagnosed’ with when no other diagnosis can be determined such as Irritable Bowel Syndrome (IBS) and Chronic Fatigue Syndrome which have serious and often debilitating symptoms.

We did not specifically switch to a real foods diet due to health reasons. However, we did discover an amazing difference health wise nearly from the start. Joe and I were both ‘diagnosed’ with IBS. I say diagnosed but truth is that IBS is a diagnosis of exclusion. Which means they couldn’t find anything else wrong. Joe and I both had numerous tests over the years and tried considerable remedies to alleviate our symptoms. I had been experiencing the same symptoms at some degree since I was in 3rd grade. That is a long time to have a tummy ache! Sadly, my little girl Lulu was also starting to have ‘stomach troubles’ and I feared she was on her way to IBS and her own lifetime of pain and discomfort.

I remember one day when I realized that I was no longer having stomach aches, that I had regular and normal bowel movements and that I was functioning on a different level than I had been. I had more energy and less anxiety. One of the components to my IBS was severe heart burn. I used to eat Tums and Rolaids like candy plus take a prescription for acid reflux. I was able to eliminate those completely. I have to say, I didn’t realized just how badly I felt until I started feeling good. I sometimes wonder how I managed all those years. Joe and Lulu were also noticing a change in symptoms (however, Lulu doesn’t admit to it. She does not want to think that she can’t eat ‘normal’ foods like a regular 14 year old) and Kiki said that she also ‘felt better’ with the way we were eating.

I hate to admit to this, but as time went on I took for granted ‘feeling good’ and slacked a bit. It started innocently enough. I’d be in town doing errands and decide to stop for a bite to eat. Or maybe I’d decide to buy a ‘special’ loaf of bread for dinner instead of making a soaked or sourdough bread. Those little changes opened the door for more not good changes. I soon found myself experiencing the IBS symptoms that had been alleviated through a real/whole/traditional foods diet. I guess that this shouldn’t have surprised me. After all, the way I ate before was a big part of what was making me so sick. I don’t know why I thought I could delve back into that without any consequences. And those little excursions back into processed/prepared foods turned out to be rather disappointing. I found that my tastes have changed substantially and foods that I would have loved before were now just so-so. To add insult to injury, the weight that I had lost since we changed our eating (40+ pounds!) was creeping back on. Sigh.

I’m now back on the straight and narrow. I really learned that for me to feel my best I need to eat certain foods prepared in certain ways. I found a few things that really bothered me and I’ll make extra effort to avoid those. Specifically conventionally prepared grain products. I do not seem to have any trouble with grains that are soaked, sprouted or soured but a ‘regular’ hunk of bread spells tummy ache. I’ll be making an extra effort to limit my consumption of non soaked grains (you might notice that I mention this fairly often as I’m sharing my menu plans for our upcoming road/camping trip since I anticipate this as an issue away from home.) In addition to avoiding certain foods, I’m making sure I eat extras of other things. Dairy kefir, yogurt, raw milk, fermented veggies, kombucha and bone broth. I was very focused on these items previously but as I started slacking I stopped eating these very good for me things.

This has been a good but painful lesson. I have to admit that I didn’t really enjoy discovering that I have to eat real food. It was different for me when I thought we were doing this as a choice. I guess I do have the choice still but since I had such a bad experience going back to SAD foods, I’ll avoid that.

Edited to Add: I wanted to add a link to an article from the Weston A. Price Foundation website that specifically addresses IBS and offers some excellent solutions that I am trying to follow. Irritable Bowel Syndrome

Have you experienced anything similar? Are there foods that you need to avoid?
Photo Credit: Chiot’s Run on Flickr