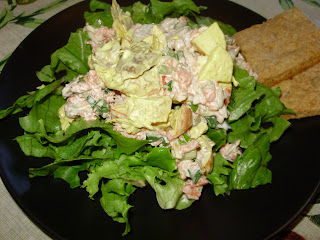 I’ve mentioned before how I do alot of planned overs. Making one meal and planning on turning it into another meal. This week ended up being the ultimate planned over week quite by accident. I know that I put up my menu for the week on Monday so this is a little repetitive but the menu plan doesn’t actually show how the parts of the meals can be carried over or ‘recycled’.
Sunday was a roasted home raised chicken that was a gift from our neighbor using this recipe (minus the rosewater). It was quite delicious served with a green salad, rice and preserved lemons (I made a 1/2 gallon of these back in December and use them every chance I get). I picked the remainder of the meat off the carcass and put that in the crock pot for broth.
Monday night we had a yummy chicken salad (made with homemade mayo) over greens from the chicken meat that was left.
Tuesday the broth was ready and became Chicken Coconut Soup which is a delicious thin soup (drink it from a mug) that includes coconut milk (recipe in Nourishing Traditions) and I started a second batch of broth. I use the same bones but add more veggies, water and vinegar. Click here for better instructions.
Wednesday night was to be Majadareh but instead of using straight water in it I used the rest of the soup from Tuesday night and a little water. The results were delicious (even though I do feel a little guilty for messing up Wardeh’s recipe). I served it as Wardeh suggested in the comments of her recipe with (homemade) yogurt and a green salad with a dressing of olive oil, lemon juice, salt and pepper. AMAZING. I think it is my favorite way to have lentils.
Thursday night, the second batch of broth was ready. The broth along with a few carrots, potatoes and about 2 cups of the Majadareh (lentils) from the night before became the base of a soup that was topped with dumplings. The flavor was outstanding and perfect with sauerkraut on the side.
The rest of the Majadareh is in the freezer for future use and the leftover Dumpling soup will be lunch for Friday and Saturday.
By cooking this way I feel that I can still provide fairly nutrient dense food and be able to keep our budget under control. If I would have purchased the chicken, I believe that our dinners, (including sides) Sunday through Thursday would have ended up costing around $30 (there is a ranch a few hours from me that sells pastured chicken in the fall $15 for a roaster so that is what I’m using for the chicken cost) or $6 each meal or $1.20 a person (of course, one person is only 16 months old but he does eat quite a bit). As you can see the meals aren’t very glamorous- except that Morrocan Chicken was quite pretty- but they are filling and were delicious. Adding in the bone broth really ups the nutrition value too. And to think in my previous cooking days I would have just chucked those bones in the garbage. tsk tsk.
I have to admit, when I was working on my menu plan, I hadn’t realized the potential for planning over the meals. I do a menu plan for the entire month and do try to think about how things will be used but by being flexible and not 100% set on my menu plan or the ingredients that a recipe stipulates we can save in surprising ways. I treat both my meal plan and a written recipe as a ‘guide’ and go from there. Plus I love the creativity of creating a semi-new and tasty food. The problem with that creativity is that often times I’m not sure what I did so recreating it is a challenge.
I’d love to hear about some of your kitchen creations. Especially since I’m working on my May menu and looking for great ideas.