Next month we’ll be taking a road trip to Oregon for my oldest daughter’s college graduation. Back in February I put out a plea for help with my menu planning for the trip. You all were wonderful and gave me some great ideas in the comments which really helped me get creative in my planning. I’m trying to avoid the nitrate filled lunch meat on (unsoaked) bread trap in hopes that digestive issues will be kept to a minimum. We’re also hoping to limit our dining out for the same reason. It seems that the longer that I eat real/whole/traditional foods the more that I notice ‘issues’ when eating regular old SAD (Standard American Diet) foods. This is really forcing me to be diligent in my every day life about what I’m eating. I was starting to slack a bit and my body said “whoa”, so I’m really needing to pay attention again. That said, we’ll still have plenty of fun vacation style foods including S’mores while camping.

The trip is actually a road trip/camping trip combined. We’ll leave here on a Thursday (late afternoon) after Joe gets off work. We’ll drive straight through but stop to eat along the way. I put up a post in March with my meal plans for that portion of the trip. For the most part, that menu plan is still the same. Since we are taking our big diesel truck (which will cause me to nearly have a heart attack every time we stop to fill up) we’ll have a good amount of space so I’m thinking I’ll take along two large coolers which will allow us to take more stuff than I’d originally planned. I pick up my milk (cow share) on Thursdays so I’ll take 2 full gallons of milk along with us. It will be wonderful to have that. And since my teen girls will be gone the week before we go, I’ll have extra milk that week which I’ll turn into cheese to take on the trip. I’m liking how this plan is coming together 🙂

This post is specifically going to address the Second Part of our trip (Segment 2) regarding food (Segment 1: Car Trip is located here). During this part, we will have just driven 18+ hours. We’ll be staying with Joe’s grandma that night. We are very excited to get to visit with her but at the same time don’t want our ‘little’ family to totally invade and overwhelm her. So we’ll be taking food along with us to enjoy with her. We’ll have supper that night and breakfast the next morning at her place. Saturday is graduation day and we’ll dine out afterwards. That Saturday night we’ll stay with my folks. We’ll also take food for while we are there.

Supper with Joe’s Grandma: Tacos. I’ll cook and freeze taco style ground beef, refried beans and sourdough tortillas to take along, I’ll also take all of the taco trimmings already prepared as much as possible. I’ll be making a fresh batch of cortido (Mexican Sauerkraut) since our supply is almost gone and also lacto-fermented salsa from tomatoes that I froze last summer. This will be the equivalent of a ‘heat and eat’ meal which will be about all the energy I think I’ll be able to put into cooking after that long drive. I’ll also borrow a little freezer space from grandma to insure some things that I want to use a bit later stay frozen. I think that if I pack them up well in the cooler they will still be in good shape to stick in her freezer and keep frozen.

Breakfast with Joe’s Grandma: Sourdough Waffles. I was so inspired by a GNOWFGLINS eCourse Thank You (September 2010) video that Erin did last year that I’m copying her. She took along her sourdough starter on a 2 week camping trip. I use my sourdough starter so much that incorporating it while camping does seem smart. And will help me with those tummy issues I mentioned. We’ll also have scrambled eggs (maybe taco flavored depending on what trimmings are left) and any fresh fruit left from the snack cooler that we have. Since unwashed farm fresh eggs do not need to be refrigerated, I’m thinking hard about how many eggs I should take along with us. Definitely I’ll take enough for the first few days but part of me really wants to try to take enough for the entire trip. Is that expecting too much? And pressing my luck not to have broken eggs all over the place?

After breakfast we’ll head to the graduation ceremony. According to the school’s website, the ceremony should last from 2 to 2.5 hours and is held outside rain or shine. June in Oregon, I’m suspicious of rain. I hope not but just in case, I’m taking some of those dollar store ponchos along! I’m hopeful that Christopher (29 months) is cooperative for the long ceremony. I’m praying for that already!

After the ceremony, we’ll go out for lunch. Since this is Sierra’s day, she chose where we would lunch. We are going to drive to the beach! It’s only an hour from her school so not too far. We’re going to a little town called Depoe Bay and lunching at Tidal Raves. I found a flickr photo of the view from the restaurant. 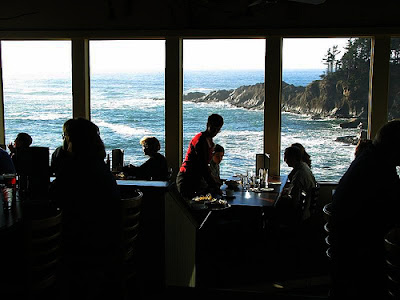 Photo Credit: tdstone on Flickr
Pretty nice, huh? We’ve eaten there several times when we all lived in Oregon. The food has been good each time we’ve been there. Depoe Bay is a fun little town. When the whales are migrating it is very common to be able to see them. There are a few that live in the area year around too so maybe we will see one from the restaurant. We’ve went on whale watching tours before from Depoe Bay but won’t have time on this trip. Too bad. Christopher loves whales after watching Finding Nemo about a million times. He even ‘speaks whale’ for us on a regular basis.
Saturday night we’ll be staying with my folks. With the late lunch I’m not anticipating needing to make much of a dinner. Just in case though, we’ll have any of the foods from the snack cooler available or scrambled eggs and I’ll take popcorn to pop up (I’m taking my corn popping pan to use for other things anyway). I’ll also do a little bit of prep work at my folks house for the next segment of our trip. Easy things like starting the lunch for the next day and soaking some lentils that I want to sprout. I’ll be borrowing my folks freezer while we are there too as I did at grandmas. And we’ll make a stop at a grocery store while in town to restock.
Sunday morning: Sourdough German Pancake (hopefully, I’m playing with a recipe that I think will work out), clabber cheese (raw cheese, made at home), fresh fruit
After breakfast, we’ll pack up and head to the Southern Oregon Coast (Oregon Dune Area) to start our camping portion of the trip. I’ll share about that in a separate post (Segment 3: Camping at the Beach) and from there we have two more segments (The Long Trip Home: Part 1 and Part 2). We did have a slight change to our plans. Originally we had thought that the last two nights of our trip home we’d stay in a hotel/motel. However, we are staying in a smallish town and while it does have lodging choices the prices were way more than we wanted to spend. So we’ll be taking our tent along and camping the last two nights. Joe and I prefer that anyway. Kiki and Lulu are disappointed. I think they’ll enjoy it in the end though. Plus, in some ways, staying in a campground will be easier for me food wise than staying in a motel. At least I’ll know what to expect with my cooking facilities.
Since the trip is coming up so quickly, I hope to get the rest of my plans put up in the next few days. I continue to look forward to any feedback and suggestions that you might have.
Do you take your own food when you visit friends and/or family? Does that work out well for you?