I often post about different recipes and uses for my sourdough starter. You might be thinking that I have a sourdough obsession. You might be right. I think I do. I have a goal to someday produce only naturally leavened baked goods.

This weeks sourdough experiment was Flatbread (also called Naan) to go along with our Garbanzo Bean Curry. I have made a yeast based Naan many times using this recipe. It is very good and to be honest, I was nervous about messing with something we like so much.

I decided that since we love our basic everyday sourdough bread I would use it as the basic dough for this recipe. My sourdough bread recipe makes three loaves. I made a single batch of it and let it set to do its souring for about 8 hours. Then I divided the dough into thirds and used one third amount for the Flatbread (the rest became a loaf and dinner rolls).

Since the recipe we love uses garlic in it, I decided to use that for our sourdough version.
I minced three gloves of garlic and kneaded it into the dough. The dough I use usually starts off rather wet and sticky due to being what I call a Minimal Knead Sourdough, but after it has time to set it becomes less sticky and dries out a bit. By the time that I was ready to knead in the garlic it wasn’t very wet at all. If it would have been I might have kneaded in a little bit of flour at that time just to make it easier to work with (sprouted flour would be good). I worked the garlic in for a couple of minutes and then divided the dough into little balls about the size of a golf ball. I covered these with a cloth and let them rise about 30 minutes or so. 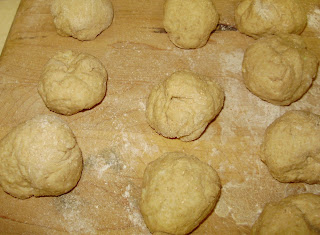 Then I used my rolling pin and a little flour to roll out each ball into something resembling a circle. I rolled them pretty thin but not super thin. Not as thin as I roll my tortillas. They puff a small amount while cooking so use your judgement as to how thin you want them. 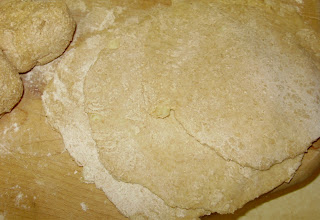 I melted a couple of tablespoons of butter in a saucepan and heated up two of my cast iron skillets. When the skillet was hot, using a pastry brush I buttered one side of the rolled out dough and put it butter side down in the skillet. I then buttered the top side so each side would have butter on it. The first side cooks for about 2 or so minutes then carefully flip over and allow second side to cook or a minute or two. 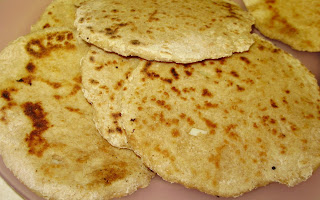 The end result was wonderfully light and fluffy Flatbread. I am not at all disappointed in the sourdough version compared to the yeast version. Even the teens thought these were wonderful. And I love that I can use my regular sourdough bread for this. It is so easy for me to make a single or double batch of the bread and take out the amount that I need for this (you might want to take a look at the Sourdough Pockets I shared recently to see another use for our basic sourdough bread). My guess is that your favorite Sourdough bread recipe could be used in the same way. The addition of the garlic is optional but adds a wonderful flavor.
Just thinking about these wonderful little breads makes me wish we had more. I think next time I will make two loaves worth of the Flatbread so we have leftovers for the next day. If I would have made them a little bigger they might be the perfect Pita bread replacement for a Gyro (want to make a Pita that has a pocket? Try this Sourdough Pita recipe) or could be used as a base for a lunch or dinner melt like the Bean and Cheese Melts Wardeh talks about in this post.
What other uses for a delicious Flatbread like this can you think of?
This post is a contribution to Pennywise Platter hosted each Thursday by Kimi, The Nourishing Gourmet.

June Meal Plan Ideas: Focus on In-Season for the Best Price and Taste