At Thanksgiving time we got our turkey from my friend JLB and as a bonus she threw in two meat ducks. We love duck. We usually have wild duck which is different from domestic duck but we have discovered that both are equally delicious. We cut up the ducks and froze the pieces separately. The livers were cooked and chopped then mixed with scrambled eggs for a delicious breakfast the next morning.

The first package was four beautiful breasts with the fat left on. We enjoyed them as the focus of our New Years Eve Dinner. Cooked simply using a recipe called Pan Roasted Duck Breast the flavor of the duck was able to shine through. Cooking the duck breasts in that manner results in quite a bit of duck fat which was saved for future use. Thinly sliced potatoes are wonderful cooked in duck fat.

Package two was 4 duck hindquarters. Duck hindquarters are rather dainty so the package isn’t very large. A few years ago Joe took me to a wonderful little restaurant on the Washington Coast. I had planned on ordering crab or some other seafood there. However, the server told me about the special of the day which was Duck Confit. I decided on that dish. The duck had been cooked in a crock pot and was fall apart tender. The flavor of it was beyond amazing. I’m hoping to be able to re-create that Duck Confit here at home. I’ve found a few different crock pot recipes for Confit. The only catch is finding the right time to make it. Those four dainty little duck hindquarters won’t go very far with my family of seven! Maybe I need to send everyone else out and make a romantic Duck Confit for two. I like the sounds of that.

Package three is all of the fat we trimmed off of the ducks. It is a rather large package and at some time I need to render it down. Hmmmm. Maybe that should be one of my kitchen goals for the month that Kelly the Kitchen Kop was asking us to share. That sounds like a good goal.

Packages four and five were each a duck carcass to be used for stock. Duck stock is a bit stronger than chicken stock but quite delicious. You could totally use chicken! I turned one carcass into stock last week (using my usual method for making stock) and made a delicious appetizer soup from about a 1/2 gallon of the broth. I used the recipe for Coconut Chicken Soup from Nourishing Traditions by Sally Fallon as my guide. She offers a variation for Coconut Duck Soup but I did end up substituting a few ingredients (Delicious Obsessions shares a similar soup here).

The end result was perfect. The original recipe calls for dried Chile flakes which I never seem to have (I really should buy some) so I used the top of a jalapeno pepper that I had in the fridge from another dinner. It simmered just long enough to release a bit of heat but it wasn’t overpowering. 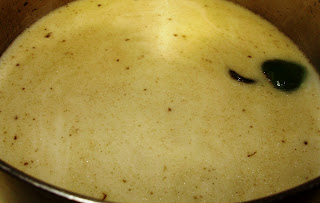 The soup was wonderful. It is on the thin side so more of a ‘drink from a mug’ type soup which of course my kids enjoyed. With coconut milk and ginger in it along with the hint of heat from the pepper, the flavors reminded me of something I would have enjoyed in a Thai restaurant.

I still have over a half gallon of duck stock left which I’ll be using later today as the liquid in the garbanzo beans I’m cooking for tonight’s dinner (why do I cook beans in broth?). In addition, I saved the fat off the top of the broth to use for cooking with too. And of course I have another complete carcass still in the freezer (which I’m sure I’ll be using to make that delicious soup again).

I would say those two ducks did well for us. Let’s recap the meals from them.

Plus all that rich duck fat to use for cooking.

We were so pleased with the flavor of the duck that we are considering raising ducks ourselves. I’m not sure that is something we will do this year but maybe next year.

Have you had duck (either wild or domestic)? Did you enjoy it? Have you raised ducks? Any advice for me?
This post is a contribution to Real Food Wednesday hosted this week by Cheeseslave.

20 Pinto Bean Recipes You Have To Try