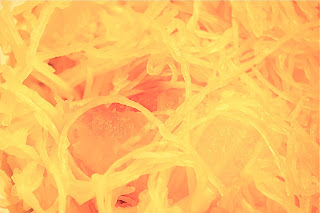 Spaghetti Squash
Foods and Feelings
Joe woke up feeling very tired again. This morning he is thinking it is diet related since he feels more tired than usual. I offered him more applesauce but he wanted peanut butter. He had a spoonful of it. Peanut butter is not a GAPS Intro food but is allowed on full GAPS. Peanut butter must be without preservatives.

Another soup creation for breakfast. This one had leeks, carrots, zucchini (pealed and seeded), antelope roast cut in small bits and a few assorted broths all mixed together. I had several partial jars with lamb, beef and chicken that I was tired of looking at in the fridge. To each bowl we added egg yolk (duck), 1 teaspoon of ghee, and a small amount of fresh mint. YUM! Love the mint, love the egg, love the buttery taste the ghee gave it. Pretty pleased with the entire soup. Today was our first day for ghee. I do not anticipate us having any issues with it.

Packed lunch for Joe consisted of a thermos of beef broth, leftover breakfast soup with half of a sweet onion from the other night added in, and sliced antelope roast covered in beef broth. There was about a cup of soup and the other half of the onion left for my lunch which I never felt like eating. I ended up having some sliced antelope but really wasn’t hungry. Soon I started to feel pretty bad, still not hungry but thought I’d better get some carbs in me. I had applesauce with a tablespoon or so of yogurt in it. I would have liked a nap too but it was about time for the girls to get home and with the rain we are having today I needed to pick them up. I did start feeling better shortly after the applesauce but still not hungry.

Dinner was quite yummy. Spaghetti Squash (boiled, shredded then ‘buttered’ with the fat from a jar of broth) topped with a Soup/Sauce creation. Beef broth, onions, mushrooms, tomatoes, zucchini, and ground beef allowed to cook through then finished with garlic and fresh basil. To our bowl we added a tablespoon of homemade yogurt. Definitely a success. I was a little iffy about cooking the hamburger in the broth. I’d done it as meatballs before but this I wanted in more of a ‘browned’ state. It worked fine just to break it up in the boiling broth and give it a couple of good stirs. I did wait and it it toward the end of the cook time when everything else was nice and soft.

What Not To Do on GAPS

Do not allow your 14 year old daughter to make chocolate chip cooks. This should be a given but I failed at it. It is a cold stormy day and she asked if she could make them. She doesn’t ask to do things like that often and I figured why not? I can handle it. Wrong. I couldn’t. I ended up eating two of them. I did get a bit of a pain in my stomach shortly after but I think that may have been guilt more than anything. Perhaps if I would have eaten the food I was supposed to earlier instead of ‘not being hungry’ I could have resisted the cookies.
The thing is, I actually do plan to once again eat cookies (homemade, properly prepared). I think that the occasional homemade cookie isn’t an awful thing (for myself, for others with their own health issues I can’t say). My intention with doing GAPS Intro is to reset my system. Until the past few months I had been feeling wonderful on our real/whole/traditional foods diet. I considered myself ‘cured’ of Irritable Bowel Syndrome having been symptom free for close to two years. My hope/plan has been to do the GAPS Intro, identify any issues that I may have and then take the time to reintroduce the foods I enjoy eating and preparing for my family.
Cheeseslave put up a post a few days ago talking about Wheat Belly and some of the parts of the post I can relate to. Wheat does get a bad wrap. I do believe that are many, many people who can not eat wheat/grains for legitimate medical reasons. I don’t think that I am one of them. I think that my two years of having zero problem consuming properly prepared grains is evidence of that. I do have issues with consuming typical wheat/grain products. Things like hamburger buns (and I really love to have a good hamburger so that is a bummer) that are purchased instead of made at home with my beloved sourdough.
My problem (one of them) is that I am stubborn and ignore what I know my body needs. I wanted to be able to go out with the ‘girls’ at work once in a while and eat that hamburger bun and all. I chose to take a full time temporary job over the summer and also work two part time jobs from home plus do the stuff around here that needed to be done (except the house cleaning, Joe did the bulk of that). I still tried to provide my family with real/whole/traditional meals that I knew to be best for us but took many shortcuts. And with the new grocery store we have in town purchased many items that I used to make (I’m not saying those are bad, I just feel that if I make it then I know how it is made and exactly what is in it). I also developed an extreme fondness for ice cream and drank way to much coffee each day. All of this together made the Perfect Storm that landed smack dab in the middle of my stomach.
Future Plans
So here I am 6 days into GAPS Introduction and feeling quite well overall. No tummy aches which is wonderful. I’m still planning to finish out the GAPS Stages at my own speed and cautiously go from there. I do love the nourishing aspects of GAPS and see specific places where we were lacking in nourishment before. I made broth just about every week but didn’t use it as well as I could. Now I see the need for making broth more often and enjoying it as an integral part of our eating. Dr. Natasha Campbell-McBride author of Gut and Psychology Syndrome says (1) “If you have decided to go straight into the Full GAPS diet, keep in mind that about 85% of everything your patient eats daily should consist of meats, fish, eggs, fermented dairy and vegetable (some well cooked, some fermented and some raw). Baking and fruit should be kept out of the diet for a few weeks, and then be limited to snacks between meals and should not replace the main meals. Homemade meat stock, soups, stews and natural fats are not optional- they should be your patients staples.” This sounds like a very smart way of eating, one that I wasn’t doing on a regular basis. While I do not think we will stay on GAPS (Full or Intro) being more aware of keeping the baking and fruit limited will be important when transitioning back to a real/whole/traditional food, WAPF style diet. I know for me, that it can be a slippery slope where baked goods and other sweets are concerned.
(1) Gut and Psychology Syndrome page 144